What to do when you are in Holland

Is visiting Amsterdam or The Hague all you can do or is there more to see? 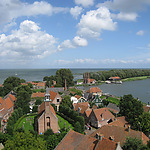 When you say the Netherlands you think of windmills and tulips and maybe wooden shoes or bicycles, but is that all we can say about a little country in the Delta of the North Sea? Come and see the Zuiderzeemuseum in Enkhuizen and enjoy yourself.

Many people do have a bucket list; you can see the whole world, but do you understand how people lived in, for instance, the period from 1880 - 1920 in some villages in the Netherlands near the Zuiderzee?

It's not necessary to travel to all those villages and towns because you can see more than 100 buildings from that period in the Zuiderzeemuseum in Enkhuizen. If you walk around might start wondering whether you are in a city with big houses and stores, or in a village with small houses, or in a harbour with boats, or at least in a polder with dikes and a windmill.

You can see the houses on the scale 1 : 1. They picked them up from villages like Zoutkamp, Vollenhove, Harderwijk and Elburg and many other places and rebuilt them in the outdoor museum. It was done in the period between 1970 en 1980.

In some of the houses you see the houskeeping of 1920 and taste the food they prepare daily from the garden.

On another location you can see a blacksmith from Harderwijk, where they used to make machines for farmers and nowadays art for your home.

And if you want to go back to school, that is also possible; you can learn writing with inc, pen, and paper, or about the geography of the Netherlands and especially the area of the Zuiderzee.

And when you have finished your tour, and you find yourself a little bit hungry, you could go to the fisherman. He has daily freshly smoked fish like herring or salmon.

And afterwards you will say, a day is too short to visit all those houses and hear the storytelling in the houses of Urk. Don't ask them about television or sms, skype or app. They live in their own time, around  1905, so a long time ago. They can show you that a life as a fisherman or the wife of a fisherman is really hard when he is on the sea.

This little story was written especially for Sylvia Kaptein, cousin